Cancer a Genetic or Mechanical Disease?

This is a phrase that appears at the beginning of thousands of scientific articles, and more and more since 2005 date of the first article showing their importance in oncology (M Paszek, 2005). But for 60 years it was agreed that oncology was a matter of biology, genetics, immunology, … But no “mechanical signals”.
Since 2005 – date of the publication of the article of Mr. Pasezk then work of D Ingber, J Raish, … – this time is over: the appearance of a cancer, its growth and tomorrow its treatment it is also a case of physics and physicists, mechanics. (You will find many popular articles on this topic including the ‘wikipedia’ ‘Physical Oncology’).
But why is this scientific evidence so hard to find its place in oncology research? Even though so many articles have shown in vitro that forces, pressures, stress applied to cells, alone or assembled in tissue, can transform these normal cells and tissues into cancerous cells and tissues and can also control the proliferation of these cancerous tissues.

The main reason is of course the pre-eminence and relevance of the genetic-biological approach: all these articles, which emphasize the importance of mechanical signals, are reluctant to be situated in relation to the dogma: “Cancer is the consequence of the appearance of genetic mutations “.
But to put the mechanical signals to their true and right place it will be necessary to invent the instruments to measure the forces inside the tissues in vitro then in vivo.
All we know how to do today is to show that a set of forces applied to a tumor modifies the behavior, which can go as far as a reversion, that is to say the return of the cancerous tissue to normal.
A recent article in the journal Nature (M E Dolega et al.) Proposes an elegant technical solution. They made microbeads polyacrilamide, a polymer widely used in biology and medicine (it is injected in plastic surgery) so biocompatible.
These beads were made adherent to the cultured cells, here are mouse colon cancer cells. These cells are cultured ‘in 3 dimensions’ or in small spheres (we speak of spheroids) suspended in culture liquid. When the balls are mixed with the cells at the beginning of the culture they incorporate these ‘spheroids’.

They are compressible, elastic and it is possible to measure from the outside their compression in other words their deformation as a function of the force applied (known as Strain). And a well-known law of physics tells us that when we know the ‘Strain’ we know the Pressure (the ‘Stress’). It is then sufficient to mix balls and cells in growth then to apply a force, a pressure, a ‘Stress’ since outside the spheroid when it is mature. The stress applied from the outside is 5 kiloPascal (kPa) which is of the order of magnitude of what exists in vivo in the animal or the human.

Unexpectedly, the measurements showed that the pressure measured at the surface of the spheroid drops sharply to 1 kPa. Then, moving towards the center, the pressure increases to gradually reach the value of 5 kPa. As if there was a ‘screen’ on the surface of this 3-dimensional cell culture. In addition, this zone of low pressure which extends over a third of the radius is where the cancerous cells continue to divide and proliferate, while in the center the growth is stopped. The authors derive an exciting hypothesis about a possible ‘phase transition’ in the spheroid tumor …. In other words, the outer third of the tumor is comparable to a viscous liquid while the interior is closer to a solid. 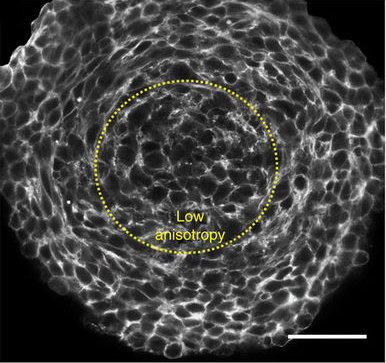 The outer crown of cell proliferation is the one that is in contact with the patient’s outer shell of any cancer: the Extracellular Matrix. Indeed, every cancer is composed of two tissues: the tumor tissue itself and the Matrix that surrounds it. But it is at this interface that the fate of the patient is played out: it is from there that the malignant cells leave, which will form metastases and kill the patient.

Hence the importance of being able to act on the ‘liquid’ part of the tumor, from which the cells that will give metastases leave.
Let us quote the authors: “All important biological processes in multi-cellular organisms require control over time and space of key decisions such as proliferation or cessation. While for a long time it has been thought that biological signals play a major role in the local proliferation potential it is now well established that mechanical signals are also important in the preservation of tissue balance (homeostasis), broken in cancer “.

We find this shyness: … “as important” … whereas the question asked is rather: which one is the cause of the other ? But this is another story.